U.K NATIONAL BONSAI SHOW 2019
​
​Steve and I from Kent Bonsai club recently attended the National Bonsai Show in Bury. We were both totally amazed at the standard of all the exhibits and compositions chosen for this prestige show. Below is a complete report of the weekend and many photos for you to look at.
Firstly, I will endeavour during the next page or two, to not only introduce you to the world of premium bonsai exhibiting but give an insight what it takes to get an exhibit chosen and prepared for the event like a National Show.

I decided around a year before the show that I would like to have my Sicilian mountain Olive (Oleaster Sylvestris) selected for this event. I had to provide many details and photographs of the tree including history etc to the selection committee. Before I heard if it had been selected or not, I started to make a basic list of requirements for display.

1.Tree preparation including pot choice.
2.Stand choice.
3.Accent design and selection
4.Scroll choice.
5.Most important harmony of all the above for the composition.

I received conformation that the tree had been accepted for the show some seven months later. I felt at last my practicing and learning had reached a personal goal for me.         THEN I GOT NERVES AND STRESS KICKED IN.

1. Preparing the tree was keeping the tree very healthy with good branch construction quality leaves. Making sure the tree was fed and worked on, on a weekly basis. Constantly trimming, cleaning basically constantly fussing for a year to produce the best tree I could. I went ahead and had a new pot designed and made especially for the tree as seen in the photos.
2. Much more difficult I felt, so I made one to fit the pot and correct height for viewing the tree in its new pot at the show.
3. Accent plants I find to be a total minefield to enter so I asked my good friend Les for ideas. I decided as my Olive is a mountain olive, so I decided on an accent of grass and fern in a bright yellow Tony Remington pot a total contrast of colour to the rest of the finished composition. The accent was presented on a thin Jita.
4. The scroll I had painted especially for this display. Finished by our Vice Chairman Les.
5. I checked, and double checked the harmony of the display by setting it up on my dining table.
The pictures below are of my complete composition. The pot was roughly designed by me then the final design and pot was crafted by the European potter ERIK KRIZOVENSKY. His pots suited the rough mountain terrain I was looking for. The stand was made by me and choice of grass and fern was mine again to fit with the mountain theme. The Scroll was painted be DARYL COGAVIN. The writing on the scroll was added by Les. The final set up was achieved by trial and error, and lots of luck.​

All this hard work and stress was awarded with a Certificate of Excellence from the judges on the day. I owe all my help, advice, confidence and most of all friendship from Steve who kept me sane (well almost) during the weekend.

Show background and layout
​
The Venue was huge with the displays on all white material with white backing. They were set so the trees would be viewed at eye level. 125 chosen displays were set up with given numbers. We were each given a space to display in.
The demonstration area was at the end of the venues large floor layout. There was seating for around 100 with lots of people standing to admire the international talent working all day on trees, both Saturday and Sunday. The demonstrators were BJORN BJORHOLM (USA), RAFAEL TORRES (SPAIN) and ANTONY SMITH (SOUTH AFRICA). There were also talks from some of the UK’s experts on display, maintenance and health of your trees including accents. There was an area where the public could have Reiki if the show got to much for them.
Many traders attended the show both from this country, Ireland and Europe selling trees, pots and other bonsai related items. With refreshments available including the shows bonsai beer that had been specially brewed for the show. With so much to see and do we were set up for a busy but rewarding weekend.
Following the big clear up we loaded “Ollie” into the car and started the 300mile drive home.
I would like to thank Tony Tickle and his team for putting on the best UK show I’ve attended. 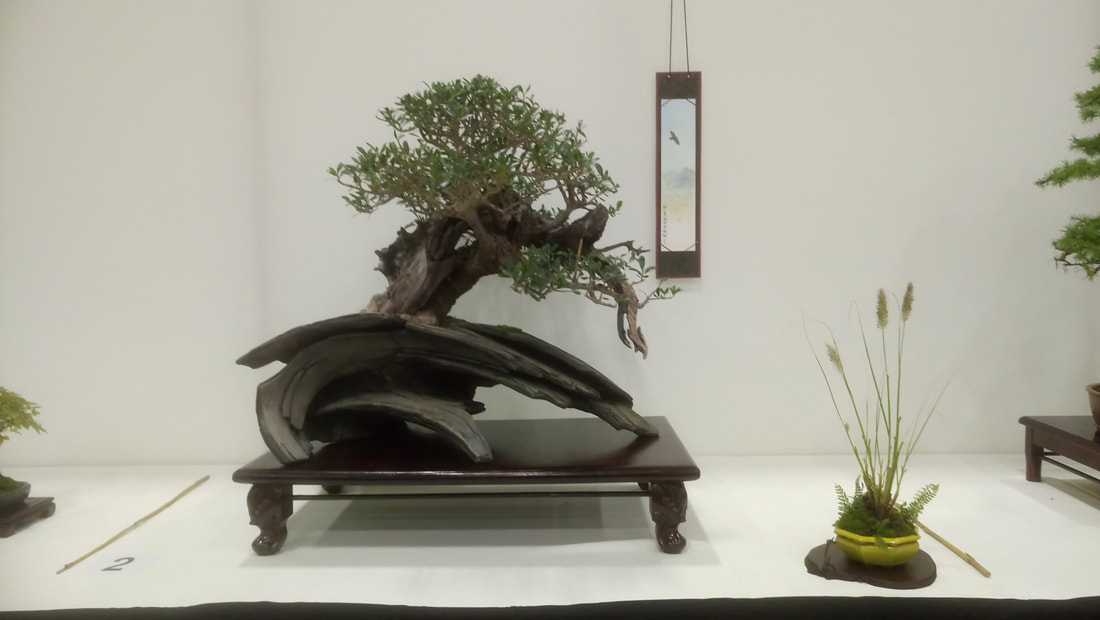